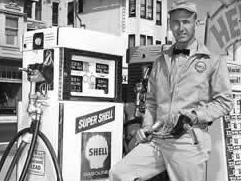 In those days, Car Washing in Gas Stations was very rare and only by hand. In 1960, Fred’s station was picked for a test of a new Car Washing process. A large vending type machine with a hose and nozzle was placed in an outdoor parking stall where you would put in a quarter and select soap or rinse.

Fred’s two sons, Dean and Guy have been learning the “ropes” for the last 20 years now and are being positioned for future operations.

Lynda Borg has served as our Office Manager for the past 17 years. Lynda started working for Fred in 1983 as a driver for one of his companies, "Mr. T's Limousines." During the following 34 years, her skills and experience have made her indispensable in keeping everything running smoothly in a hectic environment.

Over the next 20 years, Fred became involved in many automotive related ventures and built more Car Washes, during this time he expanded and installed the “Touchless” Car Washing concept in his own locations in 1990.

During the next 28 years the entire concept of car washing has evolved into the ecology arena so Fred has taken the lead to utilize his operations as "state of the art" examples for the new and completely safe Eco Soft Touch car washing beginning in 2018.